Save the Mediterranean monk seal

About the Mediterranean monk seal and how to behave if you see one... 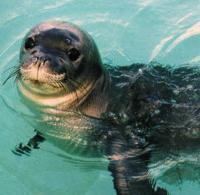 Mediterranean monk seals are usually found along coastal waters, especially on the coastlines of islands. They are sometimes found in caves with submarine entrances when the female is giving birth and just to get away from other disturbances, such as boats.

Mediterranean monk seals mate during the months of September-November. Mating usually takes place in the water. They reproduce very slowly starting at the age of 4. The time between births is 13 months, and the gestation period is 11 months. Pups are born about 80-100 cm long and weigh 17-24 kg.

When females give birth, they go on the beach or in caves. A female will usually remain on the beach or in the cave nursing and protecting the pup for up to six weeks. During this time, the female must live off of stored fat because she never leaves the pup, not even to feed herself. The pup may remain with its mother for as long as 3 years even after weaning.

When communicating with each other they make very high pitched sounds. This is done mainly while in the water to let each other know if something is wrong or if danger is approaching.

Fewer than 500 individuals of Mediterranean monk seals remain in the world today. They have been killed by fisherman who see them as competition, and many have been lost due to being caught in fishermans' nets. Pollution and boat traffic are also a problem for this species. Pollution comes mainly from human waste. This waste gets into the water in which the seals live and into the food that they eat. The problem with boat traffic is from a lot of boats being in the same area that the seals occupy, resulting at worst in collisions between seals and boats

This seal is one of the world's rarest mammals, and it is on the list of the 20 most endangered species. Another issue with the seal is that it is very sensitive to disturbances. Pregnant females are especially sensitive and will often abort when disturbed.

If you see a monk seal, please contact immediately the Group Mediterranean monk seal on the following telephone number: +385 1 4611 864. 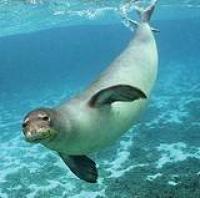 How to behave if you see a monk seal

Therefore, try to take advantage of such remarkable moments and ejoy the sight of this extraordinary creature in silence.