Where to see a Griffon Vulture and what you can do to help... 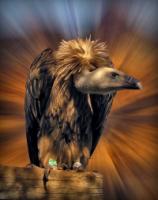 The Griffon Vulture is an Old World vulture. He was the symbol of royalty in ancient Egypt, Rome and Mesopotamia, and it is still common in Tibet to give parts of the deceased persons body to the griffon vulture to take its soul to the heaven, as a part of traditional heaven funeral.

Griffon Vulture (Gyps fulvus) is one of the biggest birds with a 2,70 m wingspan, 1 m long, it weighs between 10 - 13 kg and has a 50 years life span. Griffons are very social, living and nesting in colonies their pair for life. They build nests of grass and twigs on cliff ledges where both parents tend the egg.
They feed with killed animals and never attack live pray. At the moments of fear or stress they start to vomit or lay on the ground pretending to be dead. The griffon is extinct in much of its former range. 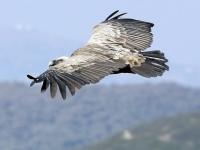 Thanks to the Caput Insulae Center from Beli on island Cres, in 1993 programme for protection of Griffon Vultures was established in Croatia. The centre has a special role in saving young griffons which fall into the sea or can be found ill or wounded. Therefore behind the building of Eko-centar they have established a sanctuary for the Griffons where the birds recover and are then released.

The island population which lives on Cres (as well as the islands of Krk, Plavnik and Prvic) is unique because here the griffons are nesting on vertical cliffs just above the sea – sometimes even less than 10 metres above the surface.

From 2001 the Center has also been marking the griffons with green plastic rings, which is a part of large international project the European Griffon Vulture Working Group (EGVWG). Until today, they have marked almost 600 Griffons with wing tags and metal rings with numbers and signs.

How you can help protect the Griffon Vulture

While navigating near coasts of island Cres, Prvic or Krk, you see a young griffon floating in the sea or standing in panic on the rock out of its nest, please contact the Eko centar Caput Insulae on the following telephone numbers: +385 51 840 525 or +385 98 368 514.