Silba ranks among the sunniest islands of the Adriatic; 2,750 hours of sunshine a year...

SILBA is an island in the Zadar archipelago, southeast of the island of Losinj; the highest peak of the island is Vrh (80 m). Short dry valleys descend to the coast, terminating in small coves, of which Papranica and Pernastica lie in the northern part of the island and Sveti Ante and Nozdre in the south of the island.

Silba ranks among the sunniest islands of the Adriatic; 2,750 hours of sunshine a year. Macchia dominates the island's vegetation cover; the forest of holm oak expands mostly over the north-western part of the island.

The only village on the island, Silba, developed on the narrowest central part of the island, between the west and east ports. Main occupations are farming, wine-growing, livestock breeding, fishing and tourism. Silba has several ports and small harbours: Silba, Sveti Ante and Zalic.

The island has been inhabited ever since the Roman times. Constantine Porphyrogenitus (10th c.) mentions it under the name Selbo. From 1091 it was a property of the Zadar monastery of St. Mary. In the 15th century it came under the -power of Venice. In the 17th and the 18th centuries the village of Silba was known as a centre of seafarers and owners of sailing ships, it experienced a period of stagnation in the second half of the 19th century; the recent development of tourism has revived the development of the village. 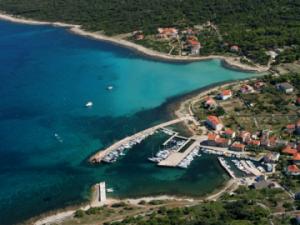